Statistics can be produced after the first game of the season has been completed, however, it does not give us a great deal of context especially when you look at such metrics as Premier League line-up change.

With the first international break of the Premier League complete it gives us the perfect time to take stock of the first month or so of action. Statistics can be produced after the first game of the season has been completed, however, it does not give us a great deal of context especially when you look at such metrics as Premier League line-up change.

I’ve been collating the Premier League line-up change data from the first four weeks of the 2018/19 season to see if it can shine any light on what squads seem to be the most settled and which ones have been subject to early upheaval.

A big thanks to WhoScored for providing the data from the first 40 Premier League matches of the season and the changes look at follows:

First I will present the data in a table of contents, while also looking at the Premier League line-up change since the opening day of the 2018/19 campaign. 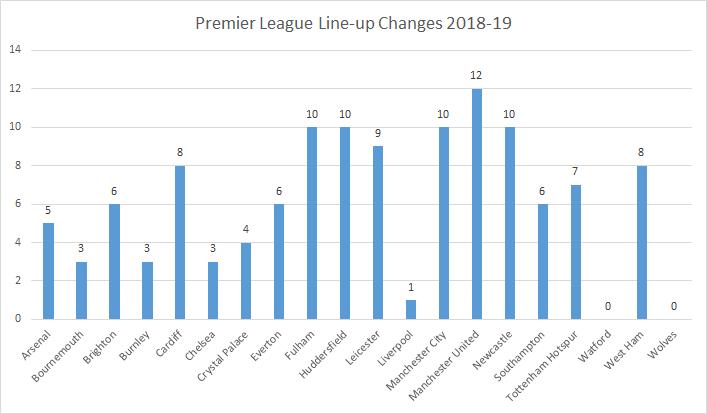 The statistic that leaps off the graph is the fact that Watford and Wolves are both living off the mantra of ‘if it ain’t broke then don’t fix it’ as neither Javi Gracia nor Nuno Espirito Santo has made any amendments to any of the four starting lineups that they have put forward this season.

In the case of Watford, it seems as if cohesion has been the key as they went into the international hiatus with a perfect record of 12 points to their name, while Wolves’ return to the English top-flight is one that has been a relatively smooth one thanks to their impressive start.

The same mantra can almost be applied to Liverpool who tops the table at present and has made just a single lineup change in these first four weeks, one that came in the shape of Jordan Henderson making his first start since the World Cup in the Reds wins over Leicester.

And it is that point that is interesting as much was made about players who went deep into the World Cup not being fully fit when club football returned. Clubs such as Liverpool probably did not feel the pinch as much as say Manchester City or Tottenham, a point that is evident when you look at their player rotation.

Tottenham had no fewer than five players put on the ‘Three Lions’ and represent England in Russia, something that could have a large knock-on effect for their manager Mauricio Pochettino and in fairness to him, it is an issue that he dealt with quite well.

The North London outfit has made no fewer than 7 changes so far during the season with the largest number of those coming in the defeat to Watford at Vicarage Road. Although it must be said that this was an act that drew the surprise of fans and pundits alike.

Just six days previous Tottenham had gone up to Old Trafford, a ground not known to be the most hospitable for Spurs in the past, and managed to come away with all three points after a very impressive performance against Jose Mourinho’s men.

Therefore to make so many switches after a win of that nature was one that arguably cost Tottenham all three points in their most recent outing, in fairness one of those was enforced due to the injury to goalkeeper Hugo Lloris three days prior.

However, Tottenham’s Argentine manager arguably made the changes in the wrong position of the pitch. Much has been made of the fact their Belgian midfield maestro Mousa Dembele suffers from ongoing fitness issues, so for him to play two league fixtures in less than a week was a decision that raised a lot of eyebrows.

Hindsight is a wonderful thing in football and on reflection the decision for Pochettino to change the shape of the team to a back three and accommodate Davinson Sanchez while also leaving Dembele as the sole defensive midfielder was one that certainly backfired.

Compare them to Manchester City who has picked up 10 points from a possible 12 and it is quite apparent that Pep Guardiola is not averse to making a change, especially when he has so many talented players to choose from. Due to an embarrassment of riches at his disposal, it’s as if he has to chop and change just to appease his squad members.

So far they have made no fewer than 10 changes since the opening day of the season, a rotation policy that more often than not has paid dividends. The only blot on their copybook is the two points that they dropped at Molineux when held by promoted side Wolves.

That said on the evidence of Wolves that we’ve seen so far, Manchester City will not be the only ‘Big 6’ club that drops points there this season. While the fact that they have made so many changes and not suffered defeat shows that they have plenty of options throughout the pitch.

Something that will be a huge boost to them in the race for the title, especially in the final few weeks when they expect to be competing on multiple fronts. A hope that their crosstown rivals Manchester United will be aiming for, although they will need to pick up from this poor early season form. They might have to think about what they should do with Premier League line-up.

They may be languishing in mid-table right now, but they do at least top the one in this piece. Whether that is a good thing or not though I’m not too sure. Jose Mourinho has not been afraid to switch things up at Old Trafford, albeit with mixed results.

The Red Devils have seen no fewer than 12 changes to their lineups since the opening day of the season, an average of four per game since getting better of the Leicester in week 1. Not only that but they share the mantle of most individual changes in one game with 6 (joint with Newcastle).

Those six changes came off the back of their surprise defeat to Brighton in Week 2, as they played host to Tottenham, and as has already been mentioned they suffered a resounding defeat in front of their own fans, one that applied even more early pressure to Jose Mourinho.

Making a statement such as six changes obviously points to not being happy with the level of performance, something that is clearly understandable when suffering a loss as they did to Brighton. However, it also puts the focus on your team even further next time around.

And after those six changes backfired, Mourinho was still not happy with the balance of his team as three more followed for the trip to Burnley. A game that finally saw them return to winning ways after back-to-back Premier League defeats.

So with four weeks of the season in the record books, the data above throws up a few questions:

That is an answer that we can find out next week, however, there are also a couple more long-term questions or patterns we can try to look at

As the weeks progress, we will be able to analyze the data further, but this will give us a good starting point. Until next week.

If you have any requirements then please feel free to contact Dan or visit his website Real Football Data.

Have you thought about becoming a sports data journalist?

The data jobs and careers marketplace, helping people to optimize their income and skills.